Brittney Miles has a mission; to strike the right balance between football talent and achieving a college degree.

She knows the URI football players on a completely different level than most. Her work with them doesn’t garner the same headlines as their efforts on the gridiron throwing the most touchdown passes and rushing for more yards than anyone else.

“It’s about getting them on the right path regarding what they’re doing next after football is over,” said Miles, who has worked at URI since 2013. “We try to emphasize that with the guys as best we can.”

Prior to taking on a new position in August, Miles was known around the Kingston campus as the lead academic advisor/learning specialist for the URI football team. Her new title is Associate Athletic Director for Internal Operations, meaning she no longer oversees just the academic piece. Her jurisdiction includes all parts of the football program, from working the financial piece, arranging community service or speaking appearances, to planning career development.

In her own words, Miles, in her current position, can take more of a 10,000-foot view and “move the needle in a bigger way.” Her passion, however, hasn’t changed. She wants to see everyone who straps on a helmet and shoulder pads experience that same rewarding feeling come graduation day. Seeing the players walk across the stage to receive a diploma provides Miles with proof that substantial progress has been made since those initial 1-on-1 conversations that were held when the players were college newcomers.

“It’s about emphasizing and preparing the guys with what comes next,” said Miles.

A scholarship athlete for the University of Vermont women’s basketball program, where she captained the Catamounts from 2005-07, Miles understands the importance of student-athletes budgeting their time wisely. In her previous role at URI, she adhered to a soup-to-nuts approach, from planning a player’s weekly schedule in general to breaking it down specifically to each hour of every single day.

“How did last week go? What do you have this week? How are you going to manage your time?” are just some of the questions Miles would raise when huddling up with the players. “It’s okay to budget half an hour for video games or a nap if that’s what helps you unwind. Remember, though, you’ve got to eat, sleep, get to practice, get to class, and get to study hall. It’s about showing the players just how much time there is during the day and how we can help them manage it and get everything they need.”

“Time is going to go on no matter what. You’ve got to manage yourself in order to get through the day appropriately,” Miles added.

Per Miles, the type and configuration of the study halls for the URI players are based on a ranking scale which considers a student athlete’s need for support. It’s not uncommon for the freshmen or incoming transfers to be grouped in 15-20-person study halls with 2-3 athletic department-approved tutors on hand. As the players transition to sophomore, junior, and senior years, they’ll see the size of their study hall group shrink to 3-4 folks.

Last year, the URI football team earned the program’s highest grade-point-average since 1999. Under Miles’ guiding and nurturing hand, the Rams have been placing more players on the Dean’s List and CAA Academic Honor Roll. Conversely, URI has seen a decrease in placing players on academic probation. 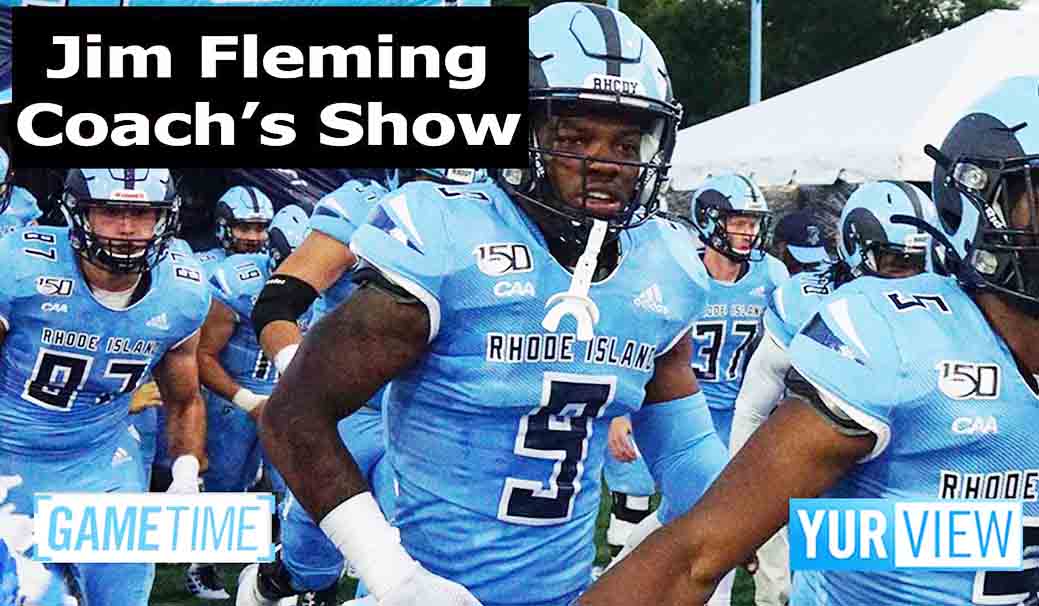 “Coach (Jim) Fleming has a goal of achieving a 3.0 GPA as a team. It’s something he says to every recruit and parent and reminds the current players,” said Miles. “We’re not there yet, but we’re definitely heading in the right direction.”

Miles admitted that her football knowledge was very limited prior to signing on with Rhode Island. On gameday, you’ll find her in the Meade Stadium stands where she’s surrounded by fans who don’t have nearly the emotional connection with the on-field participants that she possesses.

“Someone may miss a catch and I’ll hear someone say something. I’ll say to myself, ‘Come on! These guys are working their tails off for you!'” said Miles.

When you work as closely as Miles does with the URI players, you marvel at how they conduct themselves in the classroom and view it as just as important as how they tend to business on the gridiron.